Every year in Wellington (Florida), an unreal horse town and equestrian paradise,  the American association of the Spanish horse, USPRE, honors the Pure Breed Spanish Horse with a week of activities. This year, the four-day event was held during Week 3 of the Adequan Global Dressage Festival, from January 24 to 27.

The Pure Spanish Horse has been revered throughout history for its military and royal legacy. Today’s horse is the product of a meticulously designed and historically preserved Breeding Program by the Royal Family of Spain in the 17thCentury.

On Wednesday morning, a TRC seminar was held at Horses and Hounds Farm facilities, led by Bill Taylor (Xavier Farms), American breeder and USPRE board member. The presence of Spanish Breeders, Ignacio Candau (Yeguada Candau) and Amador Alonso (Yeguada los Amadores) was very helpful explaining the qualification process. Once the theory part was over, Tom Reed made a handling presentation with Encanto IX. Tanya Duffey, Executive Director of USPRE, was also on hand to explain new Revision guidelines and to answer questions.

USPRE PARTY: Horses of the Ages

On Wednesday night, the annual USPRE PARTY took place at Adequan Global Dressage Festival.  Typically one of the largest parties in Wellington, this year’s edition paid homage to the Horse of the Ages: the evolution of the PRE over the years. An audience of more than 1000 people occupied the double tent  of the Adequan Global Dressage Festival. Among the guests were Ignacio Candau, member of the executive committee of ANCCE; and Manuel González, executive secretary.

The perfect Renaissance beauty of the horses were the highlight of the different acts of the night. The majesty of the P.R.E was present throughout all of the performances, beginning with the Stallion parade. A Eight approved stallions paraded; Pavo, Vaquero HGF, Didacus, Hielo MOR, Merlin Ran, Mimoso JF, Encanto IX and Bolero CXLVIII and showed their beautiful conformation, their gaits, and above all, their noble and docile character.

Historically, the Pure Spanish Horse was prized by medieval royalty for its astonishing strength and agility. The show kicked off with a medieval atmosphere flooding the arena with the magnificent performance of Medieval Times doing beautiful Cabrioles.

The second performance reflected the past and the present of the PRE bloodlines from centuries of breeding its beauty, temperament and functionality, and the heritability of these traits can be seen in the modern PRE. The performance of Katie Knoechel riding Hielo MOR and Nicole Harrington with Camomila MCD, was an unforgettable dance duet between father and daughter.

Throughout history, the great Riding Schools of Europe were founded upon the Spanish horse lineages. In the third act of the night, four Young Riders; Sophia Schults, Kerrigan Gluch, Sarah Roda and Elena Schiefele, (all graduates from the WIT program of Lendon Gray) honored the traditions of the Spanish Riding School in Vienna.  Their quadrille  performance to the rhythm of Baroque music showed a perfect synchronization of the “Tordo” quadrille uniqueness.

In addition to its fame as a Military Mount, the Spanish Horse was considered worthy of the royal houses and families of Spain. Most of the equestrian portraits of the time show ladies of the royal houses of Europe with their beautiful Spanish horses. The fourth act honored the royal princesses and the docile nature of the stallions who are often the riding partner of women. A large number of princesses with their fabulous dresses rode glamorously. Among them were Amina Sade Bursese, Rachel Chowanec Susan Jaccoma Sarah Roda, Jannike Gray, Jane Bistline, Emilie Laval, Micah Deligdish and Sophia Schults.

The historical charm of the evening finally arrived to modern times, where the PRE has become one of the main stars of international sport. Jacqueline Cuddy with Recargo Pi, as well as, Mel Montagano with Police and finally, Rachel Chowanec with Enebro BRH performed the last acts, each one making their own Freestyle. Following the final act, the arena was flooded with a free ride of local riders with their respective PREs.

Chef Frederic Boyer, presented a menu full of Spanish dishes, such as Paella, Russian salad, Iberian ham, and the night was accented with the flavors of Sangria.

Continuing with the agenda, on Thursday, USPRE members had the opportunity to attend the CDI-W Grand Prix of Adequan Global Dressage sponsored by USPRE. This sponsorship, both in the Grand Prix, and the Freestyle Grand Prix is an incredible international platform to promote the Purebred Spanish horse.

The Annual Member Dinner was held Thursday evening at the premises of the International Polo Club and USPRE Year End Awards were presented to its members:

On Friday, the last two scheduled events were held at Hampton Green Farm and were most relevant for breeders and riders. Before lunch, attendees had the opportunity to learn several training points and exercises with the Spanish equestrian osteopath Antonio González. Guillermo Garcia Ayala rode the horse Didacus (bred by Dawn E Colmorgen, owned by Hampton Green Farm). Carmen Elisa Franco did a great job as a translator.

After the seminar, USPRE offered a brief lunch, and then the Breeders Round Table took place.  Ignacio Candau, Manolo González and Mariano Santos (International four star FEI Judge ), made up the panel. The discussion revolved around the recent, and not uncontroversial, announcement by ANCCE that they intend to only approve PRE horses for the World Championship of Young Horses, held in Ermelo in 2018. The audience got an exhaustive explanation about the World Championship of Young Horses, and its importance as a Breed Show which highlights the sport horse studbooks of Europe.

The panelists pointed out that no one in the early days believed a PRE could go to the Olympics, but since 1996 there have been PREs at every Olympics on the Spanish Team. ANCCE expects the PRE horse now to excel in a new venue, the Young Horse circuit. This opens up a world of new opportunities for riders and breeders of PREs alike—in both Spain and the US. American riders now have an opportunity to bring a PRE to Ermelo under the Spanish or US quotas. ANCCE stressed that they would soon be publishing a plan for qualification and preparation for Ermelo 2018.

Back at the dressage show on Friday night, during the Freestyle, Olympic rider Andreas Helgstrand gave a master class to PRE-riders Mikala Münter with Junior and Kerrigan Gluch with Bolero CLXVIII. The Freestyle was won by Laura Graves marking a historic milestone as she broke her own high score record with 84.675%. She wore the USPRE blanket for her winner’s lap.

USPRE week is captivating, glamorous and above all dedicated to the many glories of the PRE horse. The celebration of the legacy of the PRE reminds us that the history of the breed continues to be written. This edition of USPRE Week brought together a large number of fans and lovers of this breed. A fascinating week where once again the PRE horse has been the main protagonist. 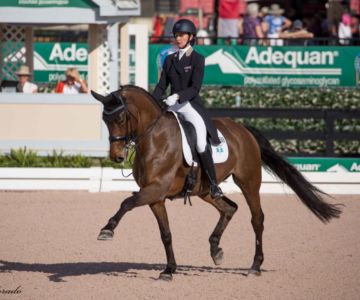 Yvonne Losos, a rider that makes her dreams reality based on tenacity and effort

Dressage, the beautiful equestrian discipline based on a group of movements of high degree of difficulty both for the rider and the horse, is an Olympic sport. This modality, also called ballet on a horse, is the perfect combination of concentration, harmony and elegance.

Yvonne started riding at the age of 5 in her native country: Kenya. Her beginnings in the horse world come from her family, both her father and grandfather rode horses, the latter was official of the polish cavalry during the Second World War.  During her childhood and young years, Yvonne combined her studies with the training of horses. When she turned 15 years old, she migrated to cold German lands, where her grandparents lived, which allowed her to mature as a rider gaining a lot of knowledge from the best trainers of the moment. At that time, Yvonne focused on the discipline of Jumping.

Years later, the historically famous “rejoneador” Manuel Vidrié, was the responsible for introducing her to classical Dressage. Every rider has it’s own perception or definition of classical. For her, classical Dressage requires an absolute dedication, most of all in the training. The feeling that the horse gives her when he performs a movement correctly, is the best reward, according to her.

A rider  with many achievements

To this day, Yvonne is an international rider with a great sports resume behind her back. Throughout her career she has competed in an infinity of international rings, achieving a total of nine medals in Central American and Caribbean Games and Pan American Games. For Yvonne, winning a championship or leading in the classification charts of a class is something magical. But achieving those unique moments is the result of multiple training journeys. Under her shadow is always Eduardo Muñiz, her husband. He is her cornerstone and her big support in all her equestrian activities.

A working day for Yvonne consists of riding eight to ten horses. During the winter show season in Wellington, Florida, her best friend Kathy Priest helps her. She counts also Ton De Ridder and the Spanish rider Jose Antonio Garcia Mena as her trainers, which she works regularly with at home and in competitions.

Yvonne combines her habitual residence in Dominican Republic with the regular places where her horses are. In the winter she trains and competes in the equestrian capital of the world, Wellington, Florida, and then she leaves to Spanish lands, concretely to the north, in the city of Gijon. During her stay in Spain, Jose Antonio Garcia Mena is her usual training engine. This past summer,  Yvonne was able to work consistently from the hand of Jose and Ton being able to improve many technical details, specially with her main Grand Prix horse, the Belgium Focio Loco W,  with whom she’s getting spectacular results.

Every athlete dreams with the Olympic Games. That dream became a reality for Yvonne at the Olympic Games of 2016 in Rio De Janeiro, an incomparable experience for her. With the help of Kathy Priest,  they not only qualified Foco Loco W but also Dondolo Las Marianas, a Danish horse she bought when he was 4 years old. “Once the Olympiacs were finished, that’s when I realized, but in the moment I really wasn’t conscious of the achievement of qualifying and competing a horse that I trained to Grand Prix” she tells us.

Foco Loco W is her star horse. She has had him for four years now and his history is worth to be mentioned. With a lot of ups and downs they have had together, from individual medals  in The Central American and Caribbean Games 2014 to the elimination in the Pan American Games in 2015. But the tenacity, that energy that drives you to continue with endeavor and without quitting on something you want to do or achieve, defines perfectly the relationship between Foco Loco and Yvonne: never say never.

Two weeks ago, both signed a double win in the Grand Prix and Grand Prix Freestyle of the CDI 3* of the Adequan Global Dressage Festival circuit. Those victories were very exciting. In the beautiful arena of the event, under the Friday Night lights, the chords of the Dominican Republic anthem were heard, a total hit for the rider.

The goals for the season have been accomplished: obtain the qualification for the World Equestrian Games of this year, with her two Grand Prix horses Foco Loco W and Aquamarijn. Besides that important date, Yvonne has the goal of a successful participation at the Central American and Caribbean Games to be celebrated in the summer in Bogota,  Colombia, and also in the Pan American Games in 2019, which will take place in Lima, Peru.
Stride by stride, Yvonne works tiredlessly to reach her new goals.

“ Any dream that deserves to be dreamed, it’s worth the effort to make it real” – Evan Gourley 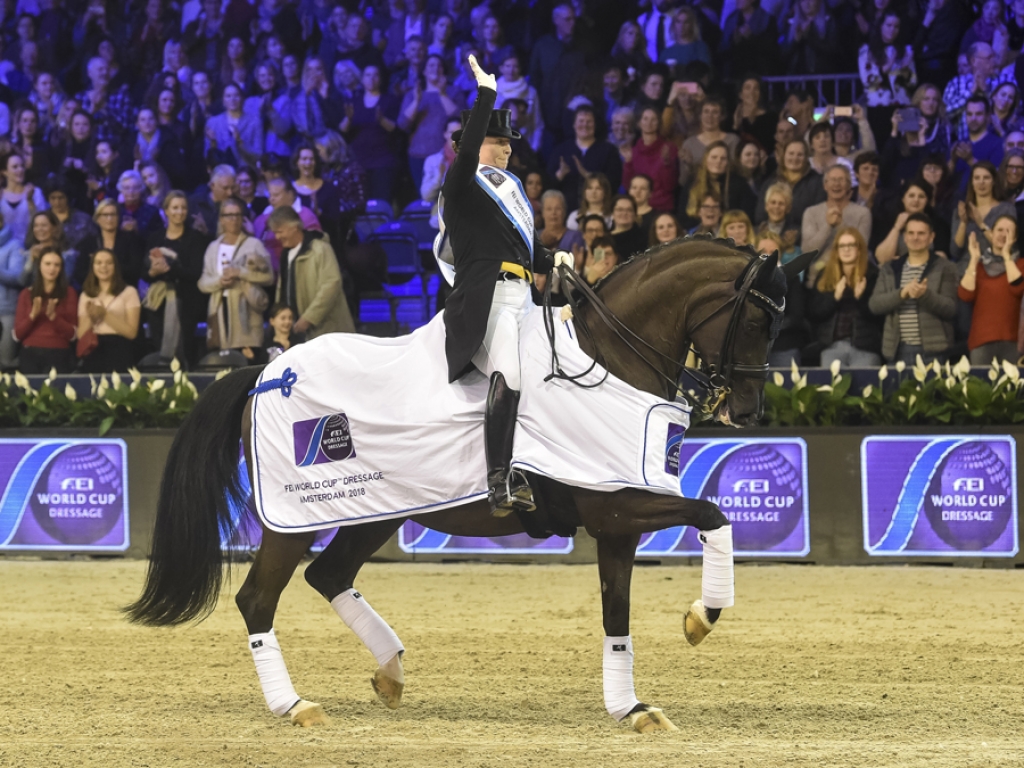 Germany’s Werth and Weihegold are awesome in Amsterdamby lilyforado / January 30, 2018
Yvonne Losos, a rider that makes her dreams reality based on tenacity and effortby lilyforado / February 22, 2018 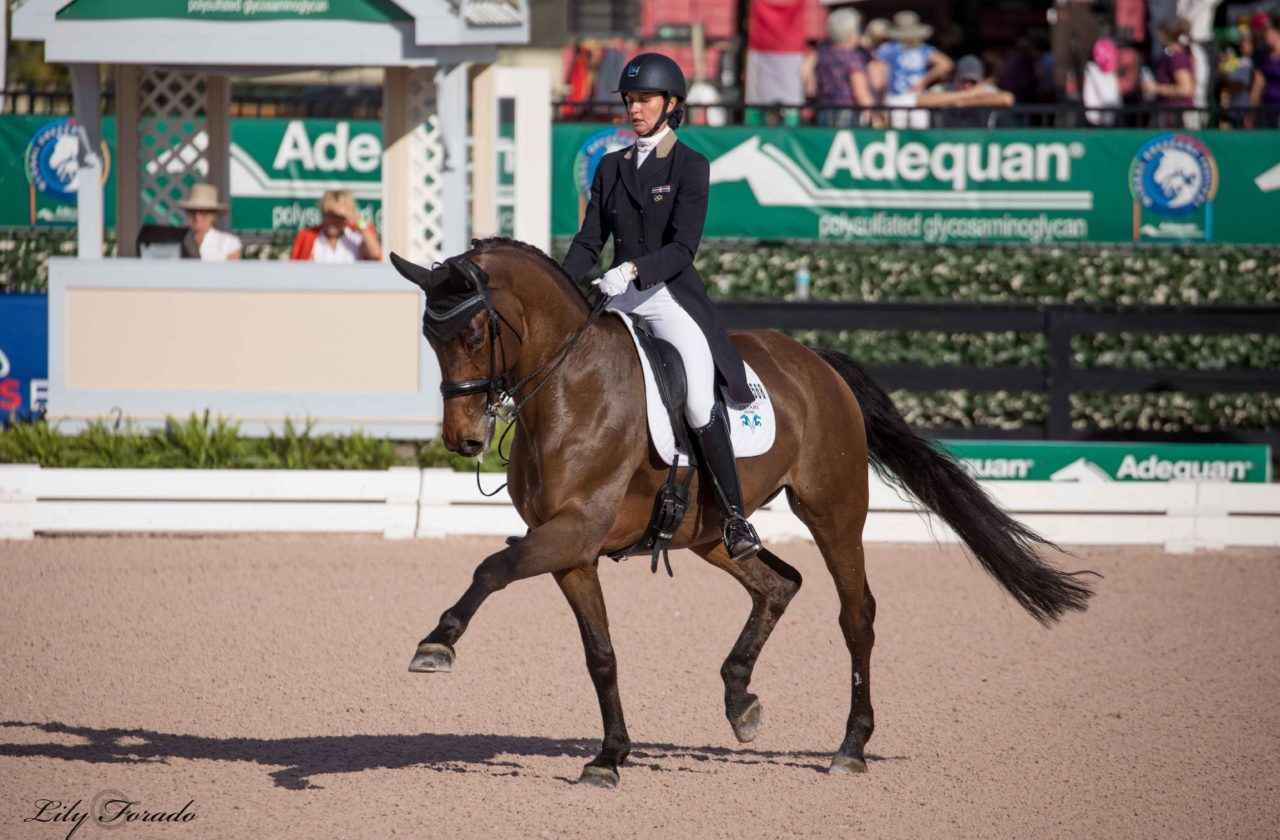