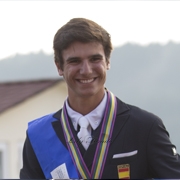 Young prodigy of the Spanish Dressage. Since the first years in the rings, his successes don’t stop coming. Son of the celebrated international rider Juan Matute SR, has been a primary factor in his future as a rider. Following the steps of his father, in 2013 obtained a fourth place in the European Championship, improving in 2014 with the Silver Medal in Nations Cup in Wellington and great results in Aachen. In 2015, following numerous participations in prestigious international European shows like Compiègne , Aachen and Hagen, ended with the gold medal in the European Championships in Compiègne. One year later, after a successfully season in Wellington,  he was selected on to compete successfully at the U25 European Championships held at the Hof Kasselmann equestrian facility in Hagen, Germany where he won the Bronze Individual Medal in the Grand Prix test on Don Diego Ymas.