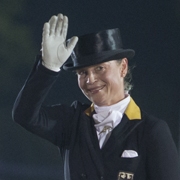 Isabell was born on 21 July 1969 at Sevelen (Rhineland). She is simply the most successful German dressage rider of all time. She graced seven medals at World Championships, 14 medals at European Championships and a German Champion of eight times – she has well deserved the title of “Dressage Queen.  In winning team gold and individual silver at Rio 2016, she took her collection of Olympic medals to a record ten.

On Gigolo, she won all her championships between 1992 and 2000, save for the 1999 European Championships in Arnheim. In 2006, she started riding Warum Nicht FRH at the international level and with him won the 2007 World Cup in Las Vegas. Satchmo was this horse one of a kind. Isabell won multiples of titles with him. In 2016, Werth secured the ride on Weihegold Old, with whom she won the team gold medal and a silver medal in the Individual Dressage at the Rio Olympics.

She has been unstable in the dressage ring since years. Recently, Isabell received her personal best score of a 90.09 % for her freestyle performance at the second leg of the FEI World Cup in Lyon, France