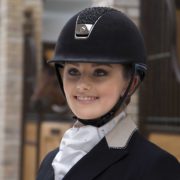 Diana Porsche was born 3rd of march 1996 in Salzburg, Austria. Diana immediately fell in love with horses and ponies. Since her childhood, her dream was to end up being a profesional rider. At the age of 12 she got her first dressage horse from the Netherlands. Few years later, when she was 14, her first victories arrived.  Eloy has been her first top international horse, who has brought her to her first European Championships for Juniors in Compiegne, France in 2014. Once the European Championships for Young Riders with Florencia, was over she bought Di Sandro. The horse Di Sandro, a 14 year-old Oldenburg, helped Diana make history by being the first Austrian rider to win the individual freestyle bronze medal at the 2016 European U25 Championships in Hagen, France.